Account and VPC Considerations for VMware Cloud on AWS

VMware Cloud on AWS is a service that is jointly engineered by VMware and Amazon Web Services (AWS) to allow customers to run VMware workloads on the global AWS infrastructure.

During the deployment phase of the VMware Cloud on AWS service, the Software Defined Data Center (SDDC) is connected to an AWS (or customer) account for seamless access to native AWS services.

In this post, I will provide guidance on which AWS account and respective virtual private cloud (VPC) to connect VMware Cloud on AWS to take advantage of native AWS service integrations.

The second account required is the AWS customer-owned account. It is owned, operated, and paid for directly by the customer if the customer chooses to utilize any AWS services within that account.

To successfully attach the AWS customer-owned account to the SDDC, the AWS account should have at least one VPC within that account. This attachment allows customers to use native AWS services to compliment whatever service they run on VMware Cloud on AWS.

The diagram below depicts the architecture of how the two required accounts for setting up VMware Cloud on AWS interact. 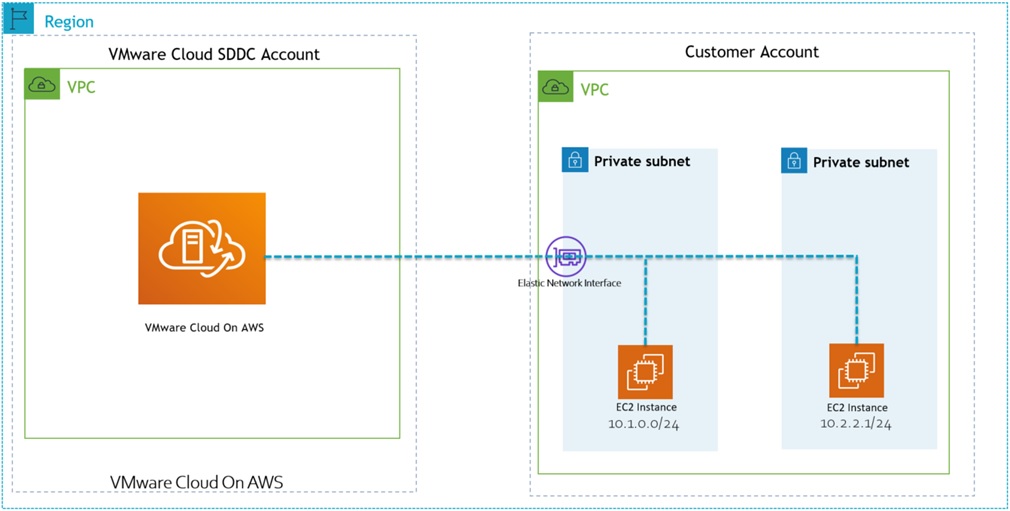 As you can see, the Amazon Virtual Private Cloud (VPC) to the left is hosted within the AWS account that is managed and operated by VMware. Customers will have no access to this VPC.

The VPC to the right is hosted within the customer AWS account, and this account is what’s managed directly by the customer. Depending on the resources running within the VPC of that account, customers may have to pay for those services.

For example, looking at the architecture above, the customer will be responsible for paying for the Amazon Elastic Compute Cloud (Amazon EC2) instances within the connected VPC in the customer account.

As described in Figure 1, the Elastic Network Interface (ENI) provides a high bandwidth and low latency access to services within the connected VPC.

The right VPC to use as a connected VPC depends on several factors. To begin, I will discuss some account deployment patterns for AWS Accounts.

AWS accounts that host the connected VPC can belong to an AWS Organization, which allow customers to centrally govern their AWS Cloud resources.

If you associate any Security Control Policies (SCPs) to the OU, ensure the SCP does not prevent or restrict the use of AWS CloudFormation. VMware Cloud on AWS uses a CloudFormation template to provision necessary resources in the connected account, specifically within the VPC for seamless access to native AWS services with the VMware SDDC.

There are also customers who utilize AWS Control Tower to manage the AWS Organization to enforce governance across multi-account environments. In such a scenario, we recommend you create a separate OU for accounts you want to use with VMware Cloud on AWS. On the OU, you need to ensure the guardrail rules that are used do not restrict CloudFormation from creating the necessary resources in the connected VPC.

Therefore, whether using AWS Organizations or a Control Tower with landing zones, you need to configure your policies to allow the account that will be associated with VMware Cloud on AWS to complete these operations in the VPC.

Standalone accounts can be added to an AWS Organization or Control Tower landing zone at a later time. If there’s a requirement to do so, ensure you have set your governance policies to allow you to run any native AWS service you may require in your connected VPC.

Also, guardrail policies or SCPs must allow AWS CloudFormation to work within the account.

Standalone accounts can also be used without being part of an AWS Organization or managed by AWS Control Tower with landing zones.

As described in Figure 1, the connected VPC provides a high bandwidth and low latency access to the VPC, which allows customers to consume native AWS services.

On the available instance types used in VMware Cloud on AWS, VMware supports up to 25 GBps aggregate bandwidth.

If you have requirements to integrate native AWS services such as Amazon RDS or Amazon Redshift, and you require low latency access to these services, it’s recommended you deploy these services into the connected VPCs to allow your VMware workloads to utilize these services.

Additionally, some existing customers architect their environments with a shared services VPC or service provider VPCs. In this architecture, customers use one VPC to expose and share services and applications to other VPCs that we’ll term as “consumer” VPCs within a particular AWS Region.

This architectural model is powered by AWS PrivateLink, which creates a Network Load Balancer for applications within a VPC and an interface endpoint to the supported for the applicable AWS service.

This creates an ENI called the interface endpoint in the subnets within the VPC with a private IP address that serves as an entry point for traffic destined to the service.

You can configure your own services behind a Network Load Balancer in a service provider VPC, and other VPCs can consume that service as shown in the diagram below.

Figure 2 describes how consumer VPCs from different accounts can consume VPC resources in a service provider account. It uses AWS PrivateLink to communicate with the target VPC.

AWS PrivateLink can work over a VPC Peering, a virtual private network (VPN), and AWS Transit Gateway connections to send traffic to a provider VPC in cases where consumer accounts and VPC reside in a different region. 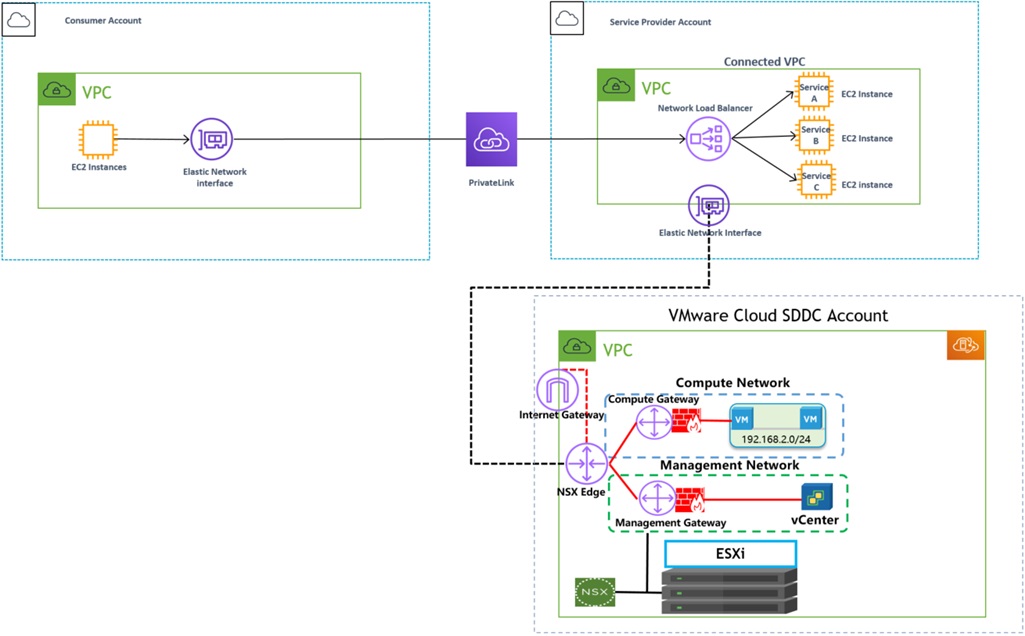 There may be cases where you may have VPCs other than the connected VPC in your SDDC, or SDDCs that needs to interact with native AWS services. To address this use case, VMware and AWS jointly engineered a new feature called VMware Transit Connect (powered by AWS Transit Gateway) within the VMware Cloud on AWS SDDC.

AWS Transit Gateway connects VPCs and on-premises networks through a central hub. It simplifies networking and puts an end to complex peering relationship. It acts as a cloud router.

Following is a description of how it works:

As you can see in Figure 4 above, customers have the flexibility to integrate native AWS services in other VPCs in the same or different AWS accounts with VMware Cloud on AWS environments within an SDDC group.

Depending on your use case, you can have a one-to-one mapping of the connected VPC to the SDDC in a simple deployment model, or you can extend it to a service provider model through the use of AWS PrivateLink, and finally leverage VMware Transit Connect for advanced deployments.

When VMware Cloud on AWS is connected to the connected VPC, it always uses the default VPC route table in the VPC.

When using the connected VPC as a shared VPC or service provider VPC to other VPCs as well as VMware Cloud on AWS, we recommend the creation of a separate route table for traffic to other VPCs. You can associate the respective subnets to the route table.

The default route table should be dedicated to VMware Cloud on AWS. Where applicable, the route table is updated by VMware with new networks created within the SDDC.

Additionally, the connected VPC should not be used for transitive routing between other VPCs and VMware Cloud on AWS either via AWS Site-to-Site VPN or through third-party VPN appliances deployed within the connected VPC. This is not supported.

In this post, I have explained the AWS account structure in connection to VMware Cloud on AWS, and also explained things to consider when planning account setup for your connected VPC. I have also provided useful considerations around the selection and use of the connected VPC in relation to other VPCs customers may have within their environment.

Please reach out to us at AWS for support in implementing any of these architectures within your environments.